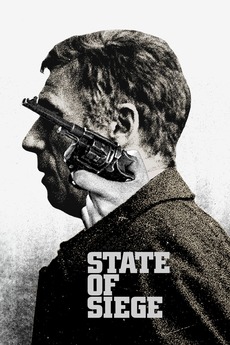 Like most of Costa-Gavras' political thrillers, the French State of Siege is based on a true story. The incident dramatized herein is the kidnapping of a U.S. official somewhere in Latin America. The director's sympathies clearly lie with the kidnappers, especially since the official (played by Yves Montand), ostensibly an expert in traffic control, has been assigned as special advisor to the government's secret police, training these worthies in the art of the torturing of political prisoners. Uruguay was the country where this story actually took place; though no names are given, there's little doubting the identity of Costa-Gavras' fictional locale. Despite its up-to-date radicalism, State of Siege adheres to time-honored Hollywood formula, with ugly, vulgar bad guys vs. handsome, articulate good guys.