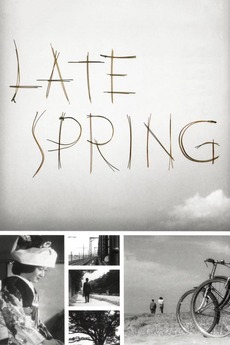 In the post-WWII Japan, the twenty-seven year-old Noriko Somiya lives a simple but happy life with her fifty-seven year-old widower father, the college professor Shukichi Somiya in the suburb of Tokyo. Noriko has recovered from a disease she had during the war, and her aunt Masa Taguchi and her friend Aya Kitagawa press her to get married. However, Noriko would rather stay single and taking care of her beloved father. When Masa finds a promising fiancé to Noriko, she tells that her father will remarry sooner, forcing the reluctant Noriko to take a decision.